The steady hum of monks praying is interrupted only by the quiet thump of the drums or the occasional holler from a shopkeeper, but there’s nothing that can distract you from the enormity of the Buddhist monument Boudhanath Stupa.

In a sort of trance, I attempt to absorb everything around me: 17th- or 18th-century buildings on my right, with silk paintings and various trinkets sitting at their steps; and the apparent resting place of ancient Buddha, Kassapa, on my left. I only come to when a Nepali man stops me. In broken English, he tells me I’m walking the wrong way. Rather confused, I turn around.

Boudhanath is a place of worship, and one of the biggest stupa in the world. Buddhists make pilgrimages to the stupa to pray; I don’t want to misstep. Thousands of colourful prayer flags drape the 36-metre monolith as it looks over the surrounding buildings with the painted-on “calming eyes of Buddha”.

“Don’t be angry,” he repeatedly tells me. I think he thought I was upset by his orders. He continually pleads. He walks ahead, stops, waits for me. He tells me again. “No angry. Little things in life, they make big difference.”

He slaps me on the shoulder and looks up, reveals a crooked, enthusiastic smile. He continues on his way, leaving this mystified foreigner in his chirpy, zen-like Buddhist wake.

This sense of mystification and wonder doesn’t abate during my time in Nepal; every day I become more fascinated by the country, and my first encounter with its food is no exception. At the Summit Hotel in Kupondole Heights, south of the stupa, I’m presented with a table laden with stout bronze goblets, filled with chutneys, vegetables, yellow lentil soup and a meat curry, which surround a mound of rice, with a wee pappadum on top – this is dal-bhat-tarkari. There are tastes of an India Kiwis may recognise, but it’s not Indian.

The mutton curry (khasi ko masu) is warm but not too spicy and it’s rich, but not creamy. The various chutneys ease or intensify the heat of each mouthful. But it’s the gunpowder-like substance on the corner of the plate that’s most intriguing. It kicks, but it’s not spicy. It has a funk, like kimchi, and a bitterness like gourd.The waiter says it’s gundruk, one of Nepal’s national foods – apparently 2000 tonnes of the stuff is made each year. Essentially, gundruk is greens from the tops of radishes, mustard leaves or cabbage plant, fermented and dried. It’s incomparable to anything I’ve tasted before and I’m an instant convert. 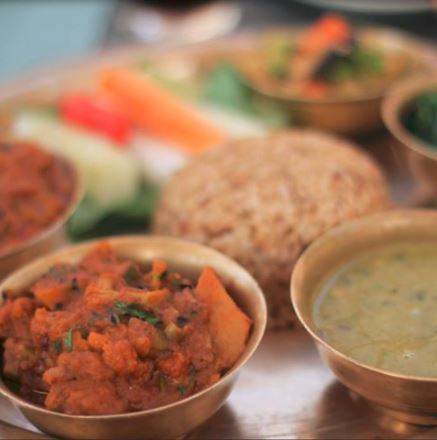 It’s the little things, as the man said at the stupa, that make a big difference.

About a 20-minute walk away is Lalitpur, historically known as Patan. The effects of 2015’s earthquake linger here – skinny streets are made skinnier by wooden beams wedged between the road and the buildings in a vain effort to keep them up. Scooters, tractors and taxis toot their way through, and shops are broken up by alleys and carts offering fried freshwater fish, fried mash potato (alu chop) and pasty-like shapale. Youʼll find plenty of momo too – the Nepali take on dumplings. Chinese influence will be denied, though the pastry is similar to that of xiaolongbao. Unlike their Chinese counterpart, however, momo feature warm spices, with vegetables, water buffalo or chicken the typical fillings. They’re often judged on the quality of the spicy tomato sauce they’re served with.

In the square, some terracotta temples stand defiantly, but plenty don’t. Cordoned off, many have signs speaking of restoration, but most sit untouched. Behind one temple, Krishna Mandir, is Honacha. People rave about this family-run restaurant that serves traditional Newari cuisine, one of the country’s most celebrated. Restaurants haven’t been around for long in Kathmandu, and this is one of the oldest. On the menu you’ll find water buffalo, the chewier version of its beefy (albeit forbidden) cousin, pounded rice flakes in lieu of rice, and well-spiced curries. Spiced lentil patties (bara) have a crunchy outside that gives way to a nicely dense body. A feast will set you back less than $5. 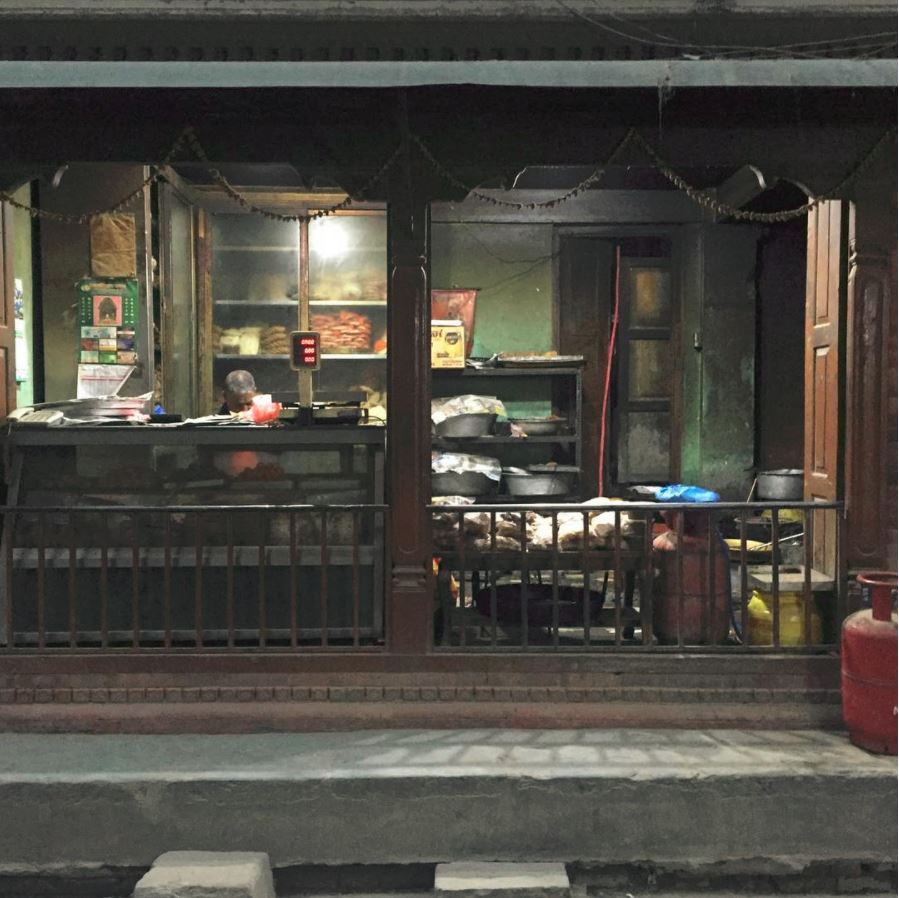 Further back into the centre of town is the Thamel neighbourhood, where you can find every souvenir you’d ever want, plus coffee shops, restaurants and plenty of places for tourists to enjoy slightly more familiar foods. Kathmandu is currently experiencing a boom in bakeries. According to an article in the Nepali Times, there’s a changing appetite among Nepalis – for many, food is becoming more than just fuel, perhaps a consequence of a growing middle class. In Kathmandu this emerging foodie culture can be seen every Saturday at Le Sherpa market, where you can buy fresh bagels (soon to be hosted in a dedicated shop in the city), organic produce, coffee, honey from the mountains, smoked meats and French-Nepali cheeses.

While Newari cuisine, which originates in the Kathmandu Valley, is perhaps the most celebrated of Nepal’s culinary cultures, north-western Thakali food is just as impressive. Some notably Chinese tastes creep into this cuisine through timur, a close relative of the numbing Sichuan pepper. Wheatgrass and buckwheat, meanwhile, which are as on-trend in the West as Sichuan pepper, have been Thakali staples for centuries.

I meet up with local Rabina Sherchan, who is kind enough to educate me about her culture’s food. Thakali Ghar Aangan in Bansbari, just north of Kathmandu, is the spot and the spread is totally Thakali, given the ingredients were all grown in the region and brought to the capital. Rabina takes charge of the ordering – to start we have kanchemba, buckwheat dough rolled into French-fry shapes and baked until crunchy, with a doughy centre. They’re a novel vessel for the timur-spiked sauce. Rabina’s phapar ko roti, buckwheat pancakes, meanwhile, are the perfect accompaniment to the beautiful chutneys that line her plate.

My macabre fascination with offal leads me to the khasi ko bhutan – even though Rabina tells me it’s not classically Thakali. I wave away her reservations over whether it might give me a bit of the “Kathmandu quickstep” (the Nepali version of Delhi belly). Crunchy, chewy, metallic and spicy, it’s a taste of the not-so-beautiful bits of a goat. Stomach, intestines and liver is boiled, then fried in cumin, chilli, garlic, turmeric and fennel (among other things). Rabina tells me this is Nepali drinking food, which doesn’t come as a surprise.

Something else that comes as no surprise is that Nepali food is delicious – if you’re stuck between two hulking countries with impressive cuisines (China and India), you’ll likely have a good one yourself. But Nepal doesn’t seem to have much pull for tourists if it’s not including a mention of Everest. It’s almost an expectation that if you’re a tourist in Nepal, you do some trekking. Many have a fleeting visit to the capital only to get their trekking permits before heading to the next destination. But there is far more to the country than the trails. 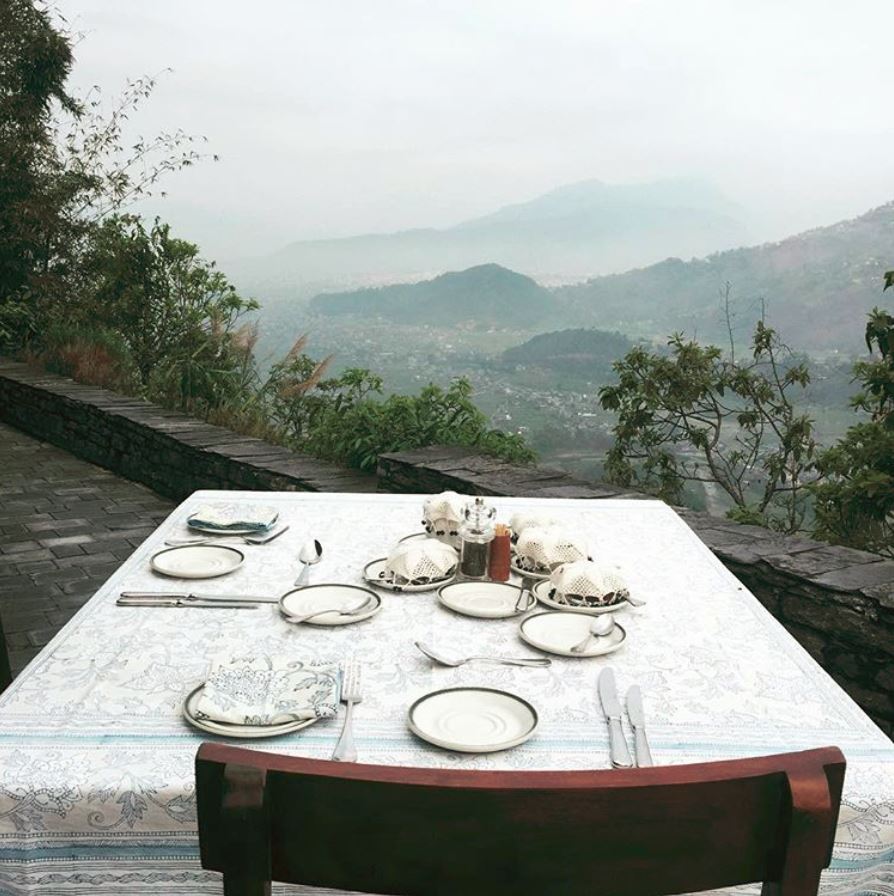 That said, I couldn’t leave without seeing a mountain. Lack of visibility cancelled every flight to our destination: Pokhara, famous for its surroundings, the Annapurna Range. Eventually, we managed to hire a driver to take us there, and arrived to Tiger Mountain Pokhara Lodge, sitting amid the haze 300 metres above the city of Pokhara. We spent two nights at the lodge, and the first day the Annapurna Range stayed out of sight, clad in its mystical haze of fog. After some rain, hail and a blast of cold air though, I awoke at six on our final morning to the most stunning, surreal view I’ve ever laid eyes on: an awe-inspiring vista of giant mountains all around us, surely too enormous to be real.

Tiger Mountain Pokhara Lodge is worlds away from the sensory overload of Kathmandu, offering sanctuary and calm to weary travellers since it was opened by Sir Edmund Hillary in 1998. While most visitors arrive after trekking, I was simply there to relax and try some seriously good food. The tilapia fish from the lake below provided the meat curry aspect of our family-style lunch of dal-bhat-takari, while dinners were a heart-warming three-course meal of local ingredients, with service the best restaurant owners would envy.

On my final dinner, I opt for the dal-bhat one last time. There’s some nicely cooked greens sitting in the corner, which I can’t quite figure out. A spicy tomato chutney and a sweet pear chutney work against each other. The unctuous meat fills the coffers and, lo and behold, there’s crunchy foraged fern fronds. There’s something else there too, something with a familiar sting.

I’m not entirely sure, as the candles are all that light the place apart from the occasional distant bolt of lightning, but I think it’s gundruk.