Unassuming and understated, The Larder deliberately avoids the pomp of many inner-city restaurants. Frills and fuss aren’t needed when everything else is done so perfectly.

It seems fitting that The Larder sits in old tea rooms, on the corner of Darlington St in Wellington’s Miramar suburb. It fits into the landscape. There’s nothing to hide – try Jacob Brown’s food or take two minutes to meet the chef and his maitre d’ wife Sarah Bullock and warmth will flood over you.

They opened the suburban restaurant seven years ago, after years working in inner-city establishments. Labels don’t imprison the couple’s scope.

“We’re a suburban restaurant, so we’re all things to all people,” Brown says. They bake bread, serve up poached eggs for breakfast and take people in for lunch, not to mention boasting a seriously impressive dinner menu. “We’ve got all these different things happening in one space.” That effort to cater to everyone, to welcome them and serve them, has meant they’ve assimilated into the community seamlessly.

They became a couple 16 years ago before setting off overseas for a year. Returning to Sydney, they parted ways in their work life. But Brown always wanted to rekindle that professional relationship. “I’d always dreamed of working with Sarah again. Plus, I knew how good she was.”

Walking through the door of The Larder, the warmth of the welcome and the smooth, attentive service is largely because of Bullock. These are the traits that surely made Jacob so keen to renew the working relationship with his wife.

Affable and poised, Bullock was recognised this year at the Cuisine Good Food Awards as Restaurant Personality of the Year. The judges praised how Bullock knew “what to say and when to say it” and lauded her extensive knowledge of the menu – “right down to food sources”. She’s “hospitality personified”, they said.

Adding to her affability is her humility. It was an unexpected accolade, Bullock says. But it’s not only recognition for her, it’s for the community that has supported The Larder from the start, she says, and their response left her overwhelmed.

In Miramar, life is divided between the home and the restaurant, a line that blurs – in a good way. The couple have three sons – Sam, 12, Elliot, 10, and Lewis, 8 – and home life is naturally hugely important to them. Family and friends are everything, and the restaurant underscores that, with loyal staff members and customers happy to jump in and help out with childcare.

Restaurant life involves a lot of work, and time, but “we sort of seem to just manage it”, Brown says. A lot of that has to do with proximity, as the children go to school close to home, and they live just around the corner from the restaurant – “it’s not even a few minutes away”, Bullock says.

Brown adds: “The fact that we’re so close to where our kids are, that’s a really important aspect for us as well.”

The kids know oxalis and wild parsley by sight, and occasionally gather some for Dad – with a piece of slice or a new catch on Pokemon Go being an added incentive. 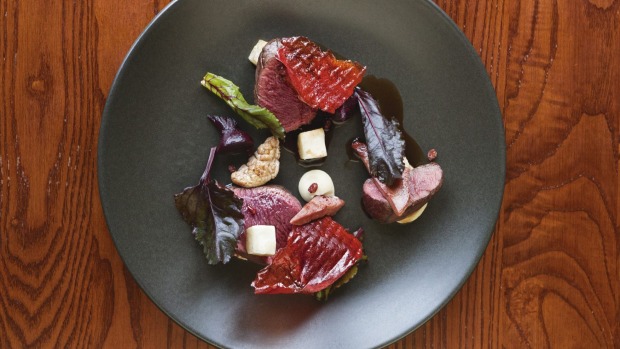 That foraging ethos underpins a lot of what they do at The Larder, and is rubbing off on their staff, who can be seen walking into work with bunches of wild delights. Brown’s passion for foraging began when he started running as a way to get out of the kitchen. It was on those trails that he found oxalis, wild parsley, fennel and more.

“I work 16 to 18 hours a day sometimes – running in the hills is a really good way to clear my head.”

It was in those hills that he started tasting some of the greenery around him. He seems to have a natural intuition as to what’s edible – although admits he is sometimes unsure. “It kind of blows my mind that the freshest and best herbs we can get are free.”

Also, it means if they ever run out, he can send someone up the hill: “Make sure you wear your jacket,” he jokes.

Mushrooms are also hunted for, and are a shared interest with a customer-friend from Weta Workshop down the road. That friend comes into The Larder, covered in dirt from his mountain bike, with baskets full of freshly picked fungi for Brown and Bullock to try.

“It’s always been a passion of mine,” he says. “I love the flavours and the things you can do with them.”

It’s that waste-not, want-not mentality that The Larder is well-known for. Their Wellington on a Plate events are always a highlight – this year the Cardiac Cuisine dinner served up heart eight ways, while previous menus have included Six Feet Under (animal feet, six different ways) and a multi-course insect extravaganza.

Bullock says while the idea of offal might turn the stomachs of some, they’ve certainly made progress in converting people. “People trust Jacob,” she says.

Diners have come to recognise that The Larder would never serve anything less than delicious, and Brown has never sold so much offal in the entire time he’s cooked. “Which is high praise, really.”

Beyond Bullock and Brown’s community ties, the successes of past years have begun drawing people from all corners to their suburban spot. The two-hat restaurant is moving onwards and upwards, becoming a destination unto itself, proving success isn’t necessarily about plying pomp. For The Larder family, it’s about relationships, community and plenty of good food.